I DID IT!!! Planned and rode all the way to CO and back by myself!!!
Made it home at 5:30 today. It was a hot ride today mixed with some thunderstorms. A total of 4256 miles, rode in nine different states over 11 days.

I didn't 'find' myself nor am I forever changed. I am still the same old cynical, passionate, energetic smart ass. heh heh I do have some deep thoughts on the ride, though.

Being alone on the road with my bike for that much time was awesome and the scenery was breathtaking. Really, like with anything else, it is about the people. While it was just me with the bike, there were the people that I met along the way, the friends that I looked forward to seeing again and of course, the friends and family that stayed behind, supporting me all the way. So, I was not really alone.

People were genuinely nice and interested. There was the lady that gave me the thumbs up and said "Nice bike." Although, she probably didn't know one bike from another. The sweet cashier in MS, with her southern drawl, "Look at you little lady riding that big ol bike by yourself, aint you sumpin?" A guy that walked by as I was pumping gas and said "I just bought a Road King, I hope to go on trip soon." He wanted me to know that we shared that common bond that only riders understand. When it started raining yesterday in MS and I could not see three feet in front of me and there was no where to pull over, a trucker stayed close behind while others passed me, was he 'watching' out for me until I found a spot? It seemed so. The high fives I received from my VROC Brothers and Sisters at the rally for making the trek alone made me proud. I could go on and on..............

One of the funnier incidents happened today. Just last night over the phone I told Greg that I was road weary and looked that way, too. Today I started in my usual summer riding attire, tank, jeans and tall boots. It was really hot and miserable today. I spent about three hours on I10, shared by many semi trucks. I got off the interstate at one point to get some gas at the Fyling J truck stop. A guy came over after I finished pumping gas and asked me "Would you do us all a favor?" I was thinking he was a panhandler and going to ask for money. "Who is all of us?" I asked impatiently. "Us, truckers" he said "You need to go to the nearest Wal Mart and buy some coveralls." "Why would I do that", I replied. "You are going to make us drive into a ditch because we can't stop looking at you." LOL!! What a nice thing to say, especially when I was not feeling too good about the way I was looking.

Thanks again to those that have followed the blog, I really enjoyed your comments and emails. Susan, (my sister-in-law), you were my biggest fan and the comments you left were always good for a chuckle. 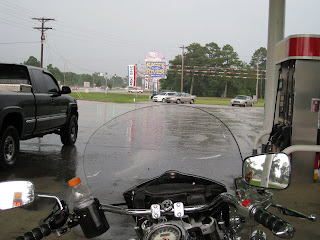 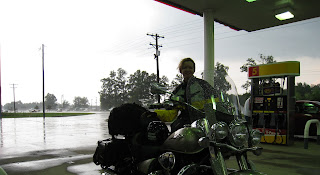 Waiting out the rain in Hattiesburg, MS.
Posted by susan-zmean1 at 11:09 PM 2 comments:

Finally got out of Texas today, really tired of smelling cow manure. :-) rode in TX LA, MS, AL & FL. Got rained on for the first time today, can't believe how lucky I have been. I was near Hattiesburg, MS. It was bad enough that I had to pull over and wait for about an hour for it to lighten up. I stayed dry after that right up until I got close to Mobile, AL.

Transferring from I65 to I10, you go through downtown Mobile. Try doing that at after work rush hour while it's raining, guaranteed to grow hairs on your chest.

The plan was to stay in Pensacola for the final night but all the hotels were filled due to workers for the oil spill staying there. The next big town was Crestview just
east of Pensacola.

Tomorrow will be the final day of my trip
Posted by susan-zmean1 at 10:45 PM No comments: 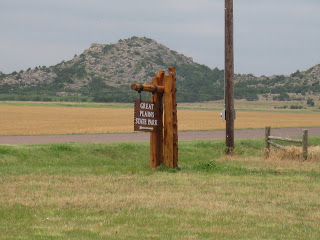 Another 520 mile day. I had planned to take a quicker route home, I40 from Amarillo all the way to Memphis in three to four days. I left at 7:00am this morning, it was overcast and chilly, I had on my leather jacket with line, was still cold. After stopping for breakfast, I checked in with Greg and he told me about some really bad weather in OK City that stretched out for a long way. To avoid this, I had to changed my route, a longer route as I am still in Texas tonight, barely, just at the AR line in town called New Boston.

Two more days and I will be home. Above is a pic that I took in OK today. I did not actually go into the park, it just happened to be where I took off my rain gear. Speaking of which, after nine days, I still have not gotten wet, what luck.
Posted by susan-zmean1 at 12:00 AM 1 comment:

Left Cortez @ 8:00 am, Sunday. Sure was hard to say good bye to friends that I won't get to see until next year at a rally. I had such a good time.

Made it to Amarillo, TX around 7:00, about 530 miles. As I was leaving the The Big Texan restaurant, I ran into Cheap B and his grand daughter from the rally. They are making their way back to AL and stopped to eat there. It's a small world.
Posted by susan-zmean1 at 10:23 PM No comments: 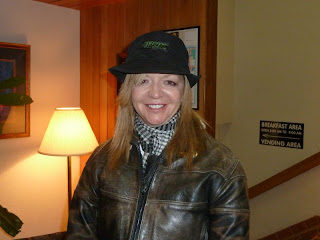 This is a hat that Rainman gave me. He won it in the raffle and already had one.
Posted by susan-zmean1 at 9:23 PM 2 comments: 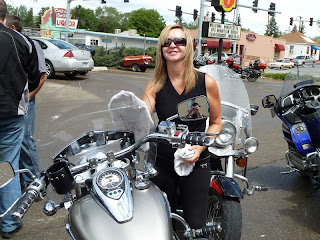 We woke to rain on Saturday and that was pretty much the way went all day. Margot, Melanie and myself had a horse trail ride planned for that day. A guided tour into the canyon. You are allowed to get off the horse and explore some of the Indian ruins. Sounds like fun, too bad it got rained out. The owner called and canceled saying that we would be crossing streams and there was always the chance of flash flooding.

Slept in a bit, socialized and drank some bloody Marys with Margot. We had a group dinner that night and then the raffle. Everyone turns in early that night with the anticipation of an early morning departure.
Posted by susan-zmean1 at 9:08 PM 1 comment: